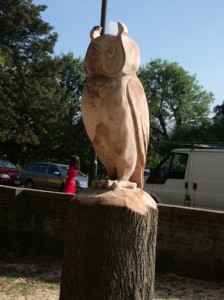 Paul Sivell finished his latest commission yesterday, 23 July 2014, of an owl in Knellar Gardens, Richmond Upon Thames.  Why not go along and have a look?
Paul will be at many shows over the rest of the summer, the first being Fort Victoria in Yarmouth on the Isle of Wight on 21 August, a great day out for all the family.  He will then be at Westonbirt Arboretum on 23/24/25 August and the beautiful Wolverton Manor on the Isle of Wight on 30 and 31st August.

Hope to see you there.  Glenn Martin, the very talented recycling sculptor will be working with Paul at Wolverton Manor on a couple of combined pieces so definitely worth a visit. 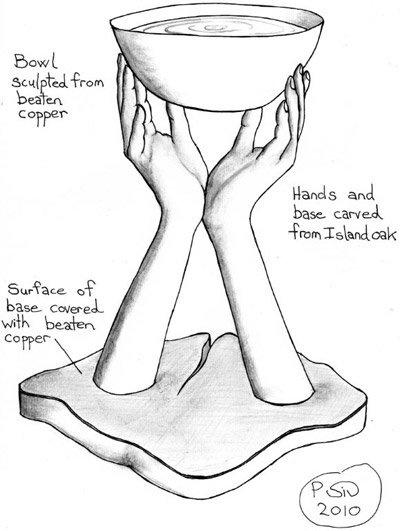 A COMMISSON to create a piece of art work, which will be used during the opening ceremony of the Island Games, has been awarded to Island sculptor Paul Sivell. The Island-born sculptor is currently working on the piece, which will form an integral part of the water ceremony at the opening event on Saturday, June 25. The 1.8m-tall sculpture will depict two hands holding a bowl, into which a representative of each of the 25 participating Island teams will add water. The hands will be carved from Island oak, the bowl will be sculptured from beaten copper and the base carved into the shape of the Isle of Wight and covered in beaten copper. The bowl will hold up to 30 litres of water.

The water ceremony — the Island Games’ equivalent of the lighting of the Olympic flame — is a symbolic mixing of the waters, recognising the Island status of the competing nations and their collective participation in this major sporting festival.

Paul’s bid was one of four from Island artists and creative companies vying for the commission.

The Chale artist began his career in forestry and principally uses condemned, dead or dying trees for his wood sculptures, which are mainly inspired by mythology, nature and Island traditions.

Ceremonies manager Keith Lane, of the Island Games Association, said: “It was a very difficult decision but Paul’s bid was chosen because his design encapsulates the ethos of the games and the local perspective.”

Cormarant sculpture with the artist

Saturday 21st January 2012. Very exciting. Paul now has a shop on his website. He will constantly be adding and updating his beautifully carved products for sale. Contact Debbie for further information.

4 July 2011. The opening of the NatWest Island Games has been and gone. We were very proud to arrive at the games and see Paul’s beautiful Water Feature sculpture taking pride of place on the stage. It looked absolutely beautiful with the sun shining kindly down on it. The opening ceremony was a great success and the Water Ceremony, where a representative from each of the participating islands poured water into the copper bowl on top of the sculpture also all went to plan.

Meanwhile, Paul has been working hard on many new sculptures. I will add some pictures of his latest work over the next few days. Oh and by the way, I have sent an email to Seb Coe, who of course opened the Island Games. Keep watching this space to see if I get a response for him to do a piece for the 2012 Olympic Games!!

The Island Games Association (IW) are delighted to announce that Paul Sivell, the Isle of Wight’s best known and highly respected wood sculptor has been awarded the commission to make the sculpture for the Water Ceremony at the NatWest Island Games which takes place on the Isle of Wight on 25 June – 1 July this year.